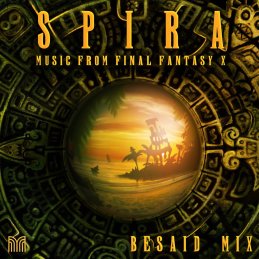 The Bwak Choir returns for their fourth Materia Collective appearance their third Final Fantasy theme cover, and their fifth recorded track as an ensemble! This is also a grand occasion as the second time we hear their chicks, last included in the track “Death Eggs Over Easy” for MOBIUS: Sonic The Hedgehog Remixed.
The original tempo of “Bravely Forward” is rather slow, trudging, and serious. We begin our track with the chickens in their chorus rehearsal room preparing for another concert. The conductor starts the song at it’s original tempo. One of the chickens, while the conductors’ back is turned, messes with the metronome after the first couple bars. Halfway through he turns it up faster, to the chagrin of the conductor. They fight over the metronome as the chorus sings faster and eventually they pass out after an impressive long held note!
We hope you enjoy our rendition of “Bravely Forward”, “Bravely Bwakking Forward” (because it takes a lot of nerve to go down this path!) Many thanks to my flock for following me again, and welcome again to daughter of Joel Everett, Emma Everett, for joining as our youngest bwak choir member!
-Bonnie Bogovich